Although I am far from an expert, I have taken some interest in the spiritual history and destiny of St. Petersburg, just as I used to do so when serving in Richmond. Here is a document that I wrote a few years ago that I hope to expand as more people can join me in the process of understanding God’s intentions for this city. The premise is that there are signposts in the history of any place that point either directly to God’s purposes, or indirectly through secular parallels or divine irony.

Well known about Russia is the religious awakening of the 1990’s. As a part of that process, citywide prayer began and was practiced. Interestingly, a former member of our team, who also had a background in psychology, was a leader in that movement, and in building relationships among the pastoral community, much as I did in Richmond. Moreover, the last Prayer Summit I participated in in Richmond before moving here was led by Tom White, who also led the early Prayer Summits here in St. Petersburg in the early 1990’s.

Not only the movement but also the general interest in God has all but died off here. The last major evangelistic push in this city was in 2003, when many churches worked together to show the Jesus Film. It was a great success if all you are interested in is what happened that day. 160,000 people saw the film in movie theaters across the city. Moreover, about 60,000 made a decision for Christ. What a great percentage! But ask the question how many ended up in a local church? With about 150 churches averaging 40-50 members for a city of 5 million people, that’s a tiny percentage of Christians (at least Protestant). Yet, if 60,000 suddenly got added to the fold, that would increase the size of each congregation by 8-fold! In fact, church attendance was not in the least impacted by that outreach!

Fast forward to today. As far as I know, there has been no citywide prayer since the 1990’s. Perhaps there was on the occasion of the above outreach. We started a small gathering out of our group a year and a half ago to pray for the city. And though there are just a handful of us even now, we have had some great times of prayer. And is often the case, the influence it has had is one that only we can see (though I don’t want to exaggerate it either). But God put it on the heart of one worship leader by the name of Irina, who, with her husband, was a well-known leader in the prayer and worship movement of the 1990’s, to start up a worship gathering for the city. 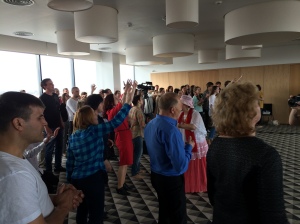 And our little team has become the backbone of the steering committee.

The first such gathering was last month, and about a hundred came. At the end of May was the second, and attendance nearly doubled. The location was great – on the top floor of a high hotel overlooking the city. For a sample video from the evening, go visit our Facebook page.

I’ve been through all this before in Richmond. There are a lot of hurdles, conflicts, etc. to overcome in the coming months and years, but it’s a good start. Pray for this new movement, for Irina, for unity and teamwork.