This is the text of the message I gave at the wedding I performed this month in Kiev. For more on how that came about, click here.

I have the joy and privilege today of bringing together in holy matrimony a tiny piece of Ukraine with a tiny piece of Russia. But I want to say to you that I am confident that what God has put together in this international relationship, no man can put asunder! Why am I so confident? Let me tell you some of their story. 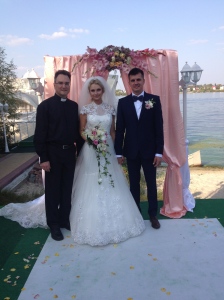 And that story starts generations before them. I consider that one of the greatest tragedies of the Soviet legacy is the loss of fathers. They were systematically killed off. And so with the fathers died the family. Although the outward morality of the Soviet leadership was conservative and traditional in many ways, they betrayed their calling as national fathers by their abuse of power and attitude towards the family, and one of the most demonic ways was being the first countries to legalize abortion. So when communism fell in 1991, the gates of outward morality fell. I was here then, and I saw the explosion of pornography. Divorce went from non-existent to where Russia, Belarus, and Ukraine have nearly the highest rates in the world. A father fights for his family. He doesn’t passively or actively seek the death of his unborn children. He doesn’t abandon his family through alcohol, drugs, and divorce. Where are the fathers, I ask you?

Neither Sasha nor Luba had a father growing up. I am sad that they did not stay to enjoy the blessing of seeing Luba and Sasha become the persons they are today.

Tell me: what was the greater honor for me today – to perform this wedding, or to walk Luba down the aisle? What I am doing now takes more time. My face is visible. I can talk and share my thoughts. You get to know me more. When I walked her down the aisle, you did not see my face, it lasted only a few seconds, and you learned nothing about me. But the honor of standing in the role of father for this amazing, beautiful gifted young woman is one of the greatest honors of my life – that is, until I get to do the same for my own daughter!

So as a spiritual father to Luba, I have been able to observe these international relations, speak into their lives, and see God doing some amazing things. I want to encourage you with a few of these principles I have observed during this process.

Marriage is the most important and foundational human relationship in the universe. How do I know? Because God made it so, declared it to be so, and confirmed it by everything He has done since the beginning of creation. Everything God did when He made the world, when He created the heavens and the earth, when he created the plants and animals, was good. When he created man, that was good too, but something was not good – that he was alone. God created marriage as the basis of all human relationships, and as a mirror and sign of His love for us.

So what did his love for us look like? Imagine God looking down from his throne and seeing the country where his people were living. It was a country with a host of problems: sin, political intrigue, corruption, and rebellion, with lots of factions wanting to save it from the evil leaders of the empire. If you were King of the Universe, how would you act? God sent his Son to invade the country, but not an invasion of military force. It was an invasion of weakness, through a baby.

But am I talking about God and how to save a country? I am talking about a special kind of international relations called marriage. I call them international not only because Sasha and Luba are from two different countries, but because men and women are from two different countries. Sasha recently admitted to Luba, “I’m used to talking with men, and I talk with them a certain way. I don’t think I know how to talk with a woman.” My dear friends, that is the right attitude to start a marriage with. You know nothing!

But we do know something if we look at God with fresh eyes. Because God himself expects his posture towards us to be a model of husbands and wives. And the connection between the two is never more clear than in the letter to the Ephesians. “Husbands, love your wives, as Christ loved the church and gave himself up for her.”
So Jesus came as a baby in weakness. And he also was incognito most of his life. Then, soon after he revealed himself, he did in fact give himself up, refusing to use the power of the universe to his advantage, and he let himself be killed.

Sasha, are you willing to give yourself up for your wife? What gives you life? Is it your work, your friends, your hobbies, or your very freedom you enjoy as a bachelor? These you must be willing to give us for your wife. It’s easy to say you would give up your physical life in theory, and maybe you would. But the apostle Paul said he had to die daily to himself. They say marriage is a new life together. But, just as in our new life in Christ, so it is here. New life starts with death, because resurrection only comes after death, death to self. I tell you a hard truth. Divorce is not death. It is the refusal of two people to die, and so they must live apart. You want life. You must die. Unless a seed falls to the ground and dies, Jesus said, it will not live. I tell you that the kinds of international conflicts you will have with your wife are not solved by reasoning. They are not solved by force. They are not solved by even negotiations. You say, how can this be? Is it not normal to solve a conflict by seeking to find a solution that works for both sides,? Isn’t it normal to look for compromise? No, because negotiations and compromise are still about trying to get what I want and giving only what it will cost to get that. International relations between husbands and wives must be built on honor, trust, and commitment to each other. Anything else will fall apart.

But as I said before, I am confident it will not fall apart, but quite the opposite, grow in strength. This couple has a calling as a couple. Luba came to me early this year to tell me there was a man in her life who was interested in her. She asked me for some some fatherly participation in the process, which I was glad to give. When Sasha asked her for her hand, she asked for even more participation from me, not because she was afraid or worried, but because her heart is to honor God and not rush into marriage without seeking His will and the blessing of key people. When she told Sasha that he would have to undergo a measure of testing from me first, he was a little surprised, but he loved her too much to resist. Besides, he knew he would pass any test! Only he didn’t know about my tests! I think we met 5 times in the 6 days he was in St. Petersburg. I think that was more than all their meetings with their mothers and pastors combined. I gave them an online test that covered over 150 questions in 9 areas of relationship. I’ve been giving that test during pre-marital counseling for over ten years, and I must say that I never had results like these. 8 of 9 areas were strong. Only one weak area. Now that one area is very important, so I prayed. And God gave me a word for this couple, and I want to read part of it to you, because you need to know it. This is the public call of their marriage, their joint ministry. 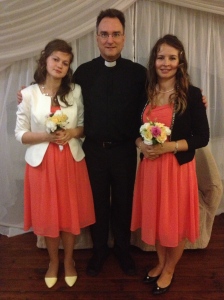 Two others from our core group went and served as bride’s maids.

They are to be a shining light and example of my bridegroom love for my church, for they are a beautiful reflection of my love for the bride of Christ. I call them to be a couple who mentors others and who minister sacrificial love for each other lived out in the context of community, where they can be on public display for my name’s sake and bring many to an awareness of my father’s heart, and well as my heart as a true groom.

What I understood from this is that they are called to be a couple who lives their lives in such a way as to give others access to the story. Their story is about how God is changing them, how He is teaching them, what His love looks like between a man and woman, and what His love looks like in the Church, because marriage is the model for the church. Marriage does not derive from the Church. The Church is built on a foundation of marriage, and they are to be a witness to the Church of what real godly love is. That’s a big calling. Sasha and Luba, you can do it. Alexander and Luba, a great joint life is ahead of you. Not a life without problems or complications, but a life full of joy, love, and meaning. Never lose the vision for the fact that your marriage is not only for your mutual blessing, but for the transformation of others too.