I have written elsewhere about the wonderful impact and incredible push forward for our ministry that we experienced last month through the conference we hosted here. Another side of the blessing from this was the fact that we as a team, and my family in particular, got to host a great man of God (and his son) and soak in his wisdom and incredible experience for a whole week. I’m speaking of Dr. Ed Smith, founder of Theophostic prayer ministry – the organization and the approach to personal transformation that has revolutionized lives worldwide over the last 16 years. 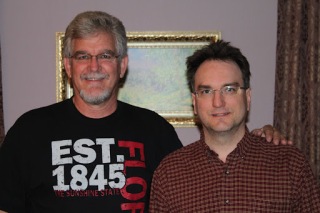 I first got trained in this method in 2001, and it immediately revolutionized my counseling practice, though I had been successful at that using a more traditional biblical counseling approach (Jay Adams et al – which I continue to use as well).  Now that the ministry has spread on it’s own to over 160 countries worldwide, demand for Smith has only grown. But as he explained to our students while he was here, he was far from eager about the idea of coming here, especially as it was coming on the heels of a trip to Austria when he would already be tired after two weeks of training there. To me his proximity was an advantage; to him it was a detractor. But as he told our group, “Lyle wouldn’t give up  on the idea of my coming, and when I said I didn’t think it would work, he merely asked me, ‘Have you prayed about that?’ and that made all the difference.”

However it worked, I was thrilled it did. It was a huge inspiration and motivator to our group, and we are busier than ever with people turning to us for help. But for me it was a huge blessing to host him and his son Josh in our home during that week. I got to see a guy that is truly unfazed by challenges, and I got to interact on a professional and intellectual level with a man whose thinking on just how change happens biblically has shaped hundreds of thousands of people and is gradually influencing the entire arena of Christian counseling. We got to talk shop on subjects such as demonization, the emotional roots of doctrinal error, and raising kids who can stop lies from entering their lives.

Moreover, it was fascinating to get his outside perspective on life here in Russia. As we rode the subway together, he was entranced by watching the faces of the passengers. His comments:

“I was taken back by the facial expressions of the Russian people riding on the metro.  There was little to no eye contact.  No one greeted another. Little-to-no conversation between people that were even traveling together.  When I would try to make eye contact and smile or acknowledge a person they would quickly look away or seem offended by my gesture. There was what appeared to be a common facial expression of despair, hopelessness and apathy.  Their eyes seemed empty, untrusting, almost without life. It is difficult to put into words what I observed knowing that my impressions could be very incorrect.  However, what I witnessed felt like desolated and disconsolate saddness.
However, in contrast, the people that have been experiencing Theophostic Prayer  displayed signs of life and hope.  Their countenances expressed inner joy and the presence of hope.  I believe as the Word of Life is brought to the hearts and minds of those dejected and cast down the Lord will raise them up.”


It was at once a sad but affirming statement on the need for our ministry here.