After a year (for many in our counseling training group) of learning, practicing, and growing together, we decided it was time to get really serious, so we took of for 3 days for some intensive practice in the specific method of prayer ministry that we have been learning – theophostic prayer. Although not strictly counseling, and not mere prayer, I have used this approach in my counseling practice for many years with astounding results. My students are seeing similar results, and so their interest is far from abating.

One of us owns a dacha, or summer home, about an hour from the city and offered to let us use it for the weekend. It, like most such places, is a very simple house, with no running water or toilet, but that makes it all the more fun. It was a family event, sharing in cooking, cleaning, and fighting mosquitoes. And since Diana and Lydia were gone, the boys tagged along. 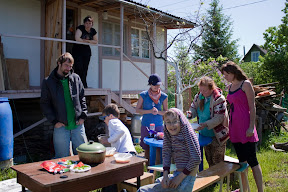 More pics from this event here.
Other than the great practice everyone got helping each other pray through difficult issues in their lives – and breakthroughs! – we also got to dig into reconciliation in a deep way. I kept hearing little conflicts, but nothing being done about them. So I started suggesting that the best path might be to talk things through. It went nowhere. Eventually, it got worse, so I called the attention of the entire group to it. What was happening was that two people (at that point) were in conflict, and nobody was doing anything. In loose group settings, maybe that’s ok. But we are a tight group who minister weekly to deep places in each others’ lives. To ignore what is happening in the group is disaster.
I had to keep proding, but after a while, they began to see that the problem belonged to them as a whole. So then I led a group discussion/teaching on biblical principles of reconciliation. I find that Russians can be really teachable, and the impact was significant. One woman was so hurt that she almost left because she had been so ignored, but now the group made a choice to minister to her, and the healing that came for everyone was powerful.
We capped it all off with a communion service and worship. Beautiful. That’s what I live for.
Advertisement