Just as the weather starts to turn tollerable for being outdoors each year (late April) a Soviet-era tradition kicks in. It brings the city back to life after the ugliness of “muddy season” when winter is melting away, leaving the accumulation of months of littering behind. We’ve participated in the last two, and it’s really the best chance to get to know neighbors that are mostly reclusive or inclined to hang with their own otherwise. “Subbotnik” starts with raking leaves, planting plants, and picking up garbage, and ends with a shishkebab barbeque and, of course, drinking.

I got the kids going working on trash. Others raked leaves. Others helped us by standing around, but hey, it’s Saturday. The day started at 11am. Work lasted two hours at the most, after which began the shaslik (shish-kebab) and drinking, which lasted until 1am that night. In these kinds of companies, drinking is pretty much mandatory. A habit I learned way back from living in Central Asia was to just take the minimum sip.
We have two special neighbors that make our subbotnik unusual:
Nadya (in the purple) brings the beauty to our courtyard. Her gift of love to the community through constant care and planting of new plants and flowers is a rare blessing in a country where public spaces are nobody’s, so no one cares about them. During the course of the day, in speaking with Nadya, I learned that her husband had died way back in December. That’s how embarrasingly out of touch I was. This was the very Valery that was the neighborhood drunk, who had such a special relationship with Lydia. The problem is that people don’t go out much in the winter, so you don’t notice when someone is gone. I still felt bad, though.

Sasha is the professional photographer who took the two group shots you see here. His great input for the day was in organizing games for the men. They did this strange stick throwing game that I could never fully understand that boys used to play back in the good old USSR.
As a professional, he and his family seem to enjoy our company more than anyone else here. I don’t even fully get it, but he really wants to build a relationship with me

(he is to my right below). I take it as the favor of God, and hope I can be a good friend. Incidentally, it is their boy that Lydia tutors in English. BTW, her comments on the day are here. 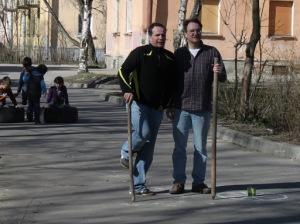