As I wrote before, the freedom with which foreigners in Russia can obtain the right to live here has been severely curtailed since we arrived a year ago. What many are now doing are either becoming students (of Russian) or looking for a work permit (often by teaching English). Since neither of these fit my need or calling, I have avoided going in that direction. I don’t want to force a square peg into a round hole just to stay; I believe God has creative solutions for those who wait on him.

A work permit doing coaching and coaching training fell through. With barely a month to go before we had to leave, we had to move fast, and the only option was a three-month “cultural exchange” visa. These kinds of visas are easy to get, but the expense and trouble of getting any visa is enough to make you cringe at doing them so often.

So how did we end up in Germany? Several months ago, knowing we would have to leave in 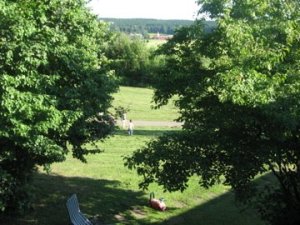 July, we started looking for an affordable place to stay in Europe while we waited for the visas to be sent to and processed in the U.S. After looking high and low, the answer was under our noses. Tobias and Katarina, new friends, colleagues, and Harbor volunteers, offered us, free of charge, a country house owned by well-to-do friends of theirs who make it available for people in ministry. It was too perfect. We needed to rest after so long in moving so fast. Even our staff conference last year was not really rest. So we got the best of both worlds – rest in a beautiful place (check out the view from our porch) and a place to wait for visas.

Back to the search for a long-term solution, almost immediately after the first visa door closed, Diana got offered a position at the International (Christian) Academy teaching high school writing with a work permit. Sounds good, and she was excited, but it takes her away from homeschooling and learning Russian. Moreover, the wild card is that the school doesn’t even have the ability to invite teachers yet. What if they get turned down, as happened to another private school recently that was trying to keep their German teacher (Tobias, the missionary we stayed with in Germany)?

They also want me, as part of the deal, to teach a Bible class and be available one day a week to substitute. I could enjoy the experience, but it’s not dead center of my calling.

It’s not like I’m not open to being a student or a teacher or working somewhere else. It’s just that I want to do what God wants. Please pray for direction, because we can make us some logical paths, but we want God’s path alone.

I dropped in on an legal firm yesterday (July 30) that works with foreigners. They offered a kind of work permit that would be great if it’s for real. Now I have to find out if it really is, but I’ve learned to keep my skeptical glasses on here. So many try to skirt the law to make things work.

Update, August 13th: Every step of the way right now is a new test in faith. I tried to encourage Diana with this fact today, pointing out that it took Abraham over a hundred years to get to the point where God could really trust him with His greatest task. “We don’t have that long,” she responded. “I expect not,” I agreed. “But He has us on the crash course right now.” Diana, ever unsure, mused, “or maybe a remedial course.”

Yesterday, I spoke with an old-timer. He pointed out that though the legal firm may be doing things right, from a formal legal sense, the problem comes when (if) they ask you at the border what the nature of your work is with the company. This puts you in the position of essentially having to lie to keep from being kicked out. Doesn’t seem like the Christ-honoring thing to do.

Last night I spoke with a friend from Richmond who planted an idea I’d already had: to offer the firm real services in exchange for the visa.

Today, we met with another missionary whose information on these types of agencies is that they are quasi-legal at best, fronts for government investigation at worst, since they mainly serve illegal immigrants from former Soviet republics.

Teaching at the International Academy has its own problems, even if we felt called. Latest word is that they won’t get permission to grant work permits until at least several weeks after our visas end, assuming they get it at all. But the director is going to call any day now and ask for an answer. Should we still say yes and then hang out in Germany a couple of months again?

In short, options are running very thin. I know that these are the times that God gets to show up in power and in a way that only He gets the credit. So this is the kind of moment we are needing now.

Update, August 20th: I had been feeling more and more certain that work through the I.A. was not what God was calling us to. We had phone calls the other day with our director and his director, and they were both (independently) clear that, of the options on the table, getting a student visa was the best one. The director of the school forced our hand the next day, and Diana had a wonderful conversation with her, despite the fact that she was realizing the need to let that opportunity go. They both realized that there was something of God calling them together, but it was not for now, at least not as intensive as originally planned.

Having let go of the teaching prospect, Diana came to be excited about the possibilities of being more focused on her language development. Actually the terms of the language school we would use would require us each to take about 4 hours a week of private lessons. If this is where we end up, then we would be content, since it so clearly would support and not detract from why we are here. Even I need to grow in my language. The main disadvantage is the tuition costs. We would be looking at an additional $10,000 of need over the course of this coming year.

We actually don’t have to decide quite yet. We just had to let the school know where we stood with them. This leaves us in some limbo, but that’s a good place for God to work on us and work everything else out for His glory.

2 thoughts on “Those elusive visas”