The Orthodox, and even the Protestants here, celebrate Easter on the Eastern calendar. So we’ve taken that up too, and it fell on April 27th this year.

Here was my cool idea for a game for my kids, that ended up drawing the other kids in our courtyard in as well:

I don’t really go for the whole egg thing, since it’s based in pagan fertility rituals, so I thought about hiding Bible verses instead. Lydia actually gave me the idea from the VBS they did during our staff conference in Hungary last year. I found verses that mentioned concrete objects that are found in our courtyard, such as:
“When you went out before your people, O God, when you marched through the wasteland…” “All the birds of the air settled on the fallen tree…” “Prepare the way for the Lord, make straight paths for him.” and I loved this one: “Swing the sickle, for the harvest is ripe.”

Next, I wrote the verses on the backs of a jigsaw puzzle and hid them, so that each find would lead to the next. Each verse had another question to answer that helped the kids fill in words into blanks, some of which were key letters that they had to unscramble to answer the question which emerged on the puzzle when it was assembled: “What does 1Cor. 15:14 assume?” The answer in the jumbled letters: “an empty tomb.”

Of course you are thinking what Diana thought: this is way over the heads of these kids. Well, who cares? I had fun making it up.

Anyway, as I was hiding the pieces, the kids who were outside got excited when I explained, “I’m hiding these for my kids to find.” At first I tried to keep them in the dark since I didn’t know how to include them. They got so interested that I finally gave in and decided we’d just make it work somehow.

So when my kids came out to start, I gave the others a Russian Bible and crossed my fingers that it would work. All o 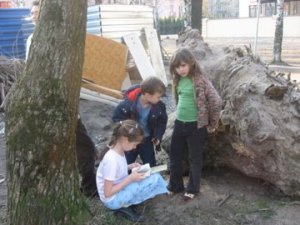 f a sudden I was teaching them names of books, how to use the table of contents and find books, what chapters and verses are, and how to find them too. Yes, we are talking about major biblical ignorance. But, hey, they thought it was great, and they showed tremendous patience with the process, even though the translation didn’t always work right. 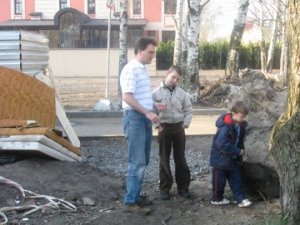