I wrote in February about the extraordinary means that the Lord used to show me that He had His finger on this one young woman – of all the hundreds of beggars around the city – for us to establish a relationship with. That process has now evolved from fleeting moments and faith to reality.

My first planned meeting with Marina did not work out, and I tried to pass along a message to her through another contact. She never called. I decided to go back to look for her again at the Metro. This time (Feb. 27th), I waited on the platform almost a half hour before giving up. Then, literally as I was walking out, a train came, and she emerged.

How good it was to see her, but we were both reserved. Marina explained that she had received my message, but forgotten my phone number. When she complained that for her whole morning’s work she had come up with only 100 rubles ($4), I offered to take her to eat (and invite Diana). She was very nervous about exiting the station, saying that she doubted they would let her back in. Apparently the workers are very capricious and don’t always let folk in they suspect of being beggars. As I have found out from other sources, you usually need to pay off up to three gatekeepers: the lady that watches the turnstiles, the policeman that patrols the platform, and the mafia that controls the place. 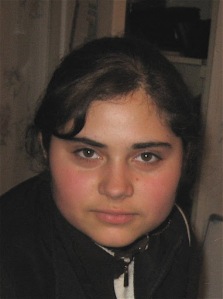 We chatted, and she asked about Diana and the kids, though she didn’t know any of our names yet. She explained that Mondays were here day off, suggesting that she could even be interested in coming over for dinner. I told her we would be delighted, gave her my number, and we parted.

She did not commit to when she would call, so we wondered if she was seriously interested (maybe afraid?), or when anything might happen again. Come Monday (March 3rd), while I was out running errands, she called, asking if today would work. I quickly confabbed with Diana who said, “sometimes you drop everything for a God moment. This is that moment.”

Marina and a friend, Alaysia, met me at the station closest to our apartment. I’ll never forget the look on her face as she spotted me from the train as it rolled into the station. She has always had a pleasant face and smile, but now, this girl, who has experience hardships and seen things that no one needs to see at age 19, beamed with delight and pointed to me like a little girl who spotted her dad come to pick her up.

We learned that Alaysia’s family often help Marina and her brothers when they can, partly because they all come from Moldavia. According to Alaysia, they are the only ones who serve Marina in any way. It was not yet 5pm, but since Marina had only had tea since morning, we ate, though they found lasagna a bit strange for their tastes. After I asked the blessing, Marina said, “So you are believers? We are too.” Alaysia further clarified, 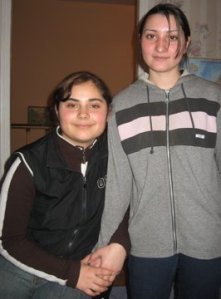 “You believe in the Father, Son, and Holy Spirit? My parents do too.” She said they go to a Moldavian church that has Americans from Virgina come every summer to serve in some way. Hmm. Tuck that all away for later.

More on Marina’s background. Her brothers, Ruslan (11), and Vasya (8) are clearly very dear to Marina. She hates not to be available to take them to and from school, and she keeps them home sometimes when it is cold. She feels that her job prospects are limited not only by the school day, but also by her handicap – a bad leg resulting the car accident that 5 years ago killed her father. Her mother is gone, but we don’t know the details yet.

In order to help her, we wanted to know more about her situation. She rents their apartment from some acquaintances who took pity on them and are “giving it away” for a mere $330/month. She can earn $25-30 a day begging in the Metro. That leaves her to supply an extra $200-$300/month for rent, food, etc.

We took down other material needs, clothings sizes, explaining that we have relationships and resources so that it would not all have to be purchased retail. She said, “You know what I was hoping? That you could help me directly, without having to find others.” I assured her that it went without saying that we wanted to give some direct help, but our personal resources were limited, and we were trying to think about the big picture. This made her feel better. I can only imagine, I said, how she must feel the need to focus on today’s needs, but that we want to help her dream again. She replied, “I’m tired of life. I come home every day with my legs in deep pain from using them, and my arms and hands in pain from the crutches. (They are crude and unpadded.) I don’t know how long I can keep this up.” I tried to reassure her, “Marina, I know that God put you into our lives because He has big plans for you. Don’t give up.”

Our kids were shy at first, but Lydia later showed some of our family pictures and talked about them with Marina. I took advantage of their conversations to go cry on Diana’s shoulder. She was the strong one today. How does this girl make it on so little? It is so hard to comprehend.

Diana and I were both overwhelmed at this point, not because we are tempted to play savior, but because it is all such uncharted territory for us. Hey, I have a Masters in Social Work. I’ve worked with the homeless. But how many social workers let work get this close to home? Where is the manual on trusting God for each step in a process of intervening in a life that needs so much on so many levels?

Next came the “border bully” (nay-sayer), in the form of our Russian tutor, Lyudmilla. She is one of our favorite people here and gives incalculable insights into the dark side of Russian society, but she was afraid for us. “My friend who works for the police department says all the beggars work for the mafia. That area where she lives has a bunch of Gypsies. Please don’t ever go down there until you are totally sure about who they are. They could slip something into your drink, and when you wake up your passport will be gone.”

I took a walk that night to talk it over with God. I never take walks anymore, since I walk all the time, but I needed to get out. Too much emotion for one day. What God showed me was that I just needed to stay the course. All this pain and potential pain, He said, was just the sign that we were doing the real work of ministry.

Thanks. I needed that.