As we were getting ready to come over this past year, Diana and I began to develop a relationship with the founder of the Harbor, Melinda Cathey. Her enthusiasm for how God might use us to serve the ministry grew the more we got to know her. By the time we arrived, we had a list from Melinda of all kinds of ministry ideas that could occupy my time, some individual items being full time work. We were excited about the possibilitis.

When we got here, one of the first people I wanted Diana to meet was Lyuba, the local director of the Harbor. I had met her during my trip here in March, and we had got on well, though no ministry direction was discussed, other than my interest in using coaching as a vehicle for empowering her staff and the kids. She was intrigued, though skeptical, having told me how hard it is to get a child from that background to think long-range like that.

Lyuba and her assistant Tanya came over to our apartment in August for dinner. If anything, the ladies hit it off much beter than even we had, which I was only too happy to see. The more we talked, the more I kept giving ideas about what could be. I completely broke all the coaching rules, I was so excited about how I could help. What I got was a lot of reasons why things were more complicated here than I would imagine. I called her the next day and told her I needed to shut up and just listen more. She responded that in prayer she had the idea to ask me to consider teaching English to the new residents for 3 months. She thought that would be the best way for me to get to know the kids, learn the nuances of their lives and that of the Harber towards them, and then better be able to work at a more coaching/consultative role in the future.

Initially the idea struck me as a step backwards. I had taught English in Soviet Central Asia back in 1991-1992 to kids and adults of all ages. Although I loved it, it was not my true gift or calling. But even before the conversation ended, God started working on me, showing me that I needed to just serve them, get my ego out of the way, and moreover, that she was right about how well this could help me understand my “field” better.

Diana and I went over to meet the kids (with Lydia) on September 12th and to give them a placement test.

Diana was so good with the kids, able to get the boys to open up and talk about a picture book she brought and to bond quickly with them, that I knew long term she needs to do something like this with the kids.

Lyida also had a great time, the girls eager to practice their English with a cute, small, non-threatenting American.

So I began with a group of four kids – three boys and a girl – on the 19th. We have a good time together. The first week we got to know each other, and last week we stayed in the kitched after dinner (we all eat together before class) and and discussed action verbs like eating and drinking. Of course no one is telling me their life story yet, but we are getting more comfortable with each other. One kid has already been hinting at his desire to come visit us at home (Yuri, pictured cooking).

I’ve also had a great opportunity to interact with the Harbor over the last week while a two-man team from CRM headquarters has been here shooting footage for a new video about the Harbor.
As an interpreter, I have been able to get to know the program better and to have more time to hang with the kids and hear their stories.

Here you see Andy (the video guy) getting a haircut from one of the residents during her first haircutting class. 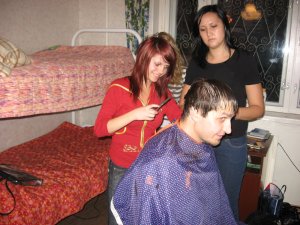