Marshrutkas = taxi vans found throughout the city (usually yellow) seating about 20, but can hold several more with standing and squishing. Usually we ride the marshrutkas to and from our temporary apt. to the Metro station to avoid a 30 min walk. They are relatively cheap — about .50 per person and our 2 boys are free and normally uneventful. 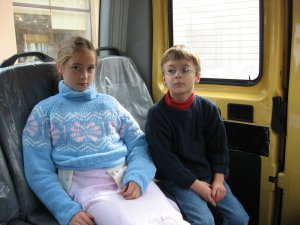 Until last Thursday I (Diana) had never taken the kids by myself on any forms of transportation. In fact, I had not ventured solo since we arrived in St. P. The first opportunity/necessity presented itself requiring me to take all 3 kids on the Metro and then marshrutka to the apt. during rush hour. My only apprehension was herding them onto these very crowded modes of transportation.

I explained to the kids that they may need to stand during the marshrutka ride, and they were all “okay” with that. As we boarded, I sighed relief because at least Lydia and Kerith found a seat. I stood in the aisle with Simon between my legs right next to a large man in a military uniform who was seated. He immediately picked up Simon and cradled him in his burly arms and started talking to him.

Well, Simon did not resist. In fact, he just sat there with the military man talking softly to him. I summoned my courage and spoke. What I wanted to say was, “Please don’t hurt my baby.” What I ended up saying was, “He cannot understand you.” The man looked up at me wondering why. Immediately he switched to very broken English/Russian mix and asked if Simon understood English and where were we from. I continued in Russian telling him from where we hailed.

We continued our conversation about my impressions about the city and why were moved here. (That took some creative explanation, and no, my husband is not a diplomat. He even complimented my Russian.) Simon finally wriggled down out of his lap, but our discussion continued. Surprisingly, the woman in front of him turned around and started smiling at me. The smiles themselves are very unusual, since we mostly get long stares, no hints of friendliness, and the occasional scolding by a babushka (grandmother). This was definitely a very special marshrutka ride!

Before I knew it, we arrived at our stop, my apprehensions about traveling solo with 3 kids in this city much abated. The military man was a gift. He boosted my confidence in speaking and gave St. P a friendly face I hadn’t seen before — just when I needed it most.

Military man, you can pick up my baby anytime.